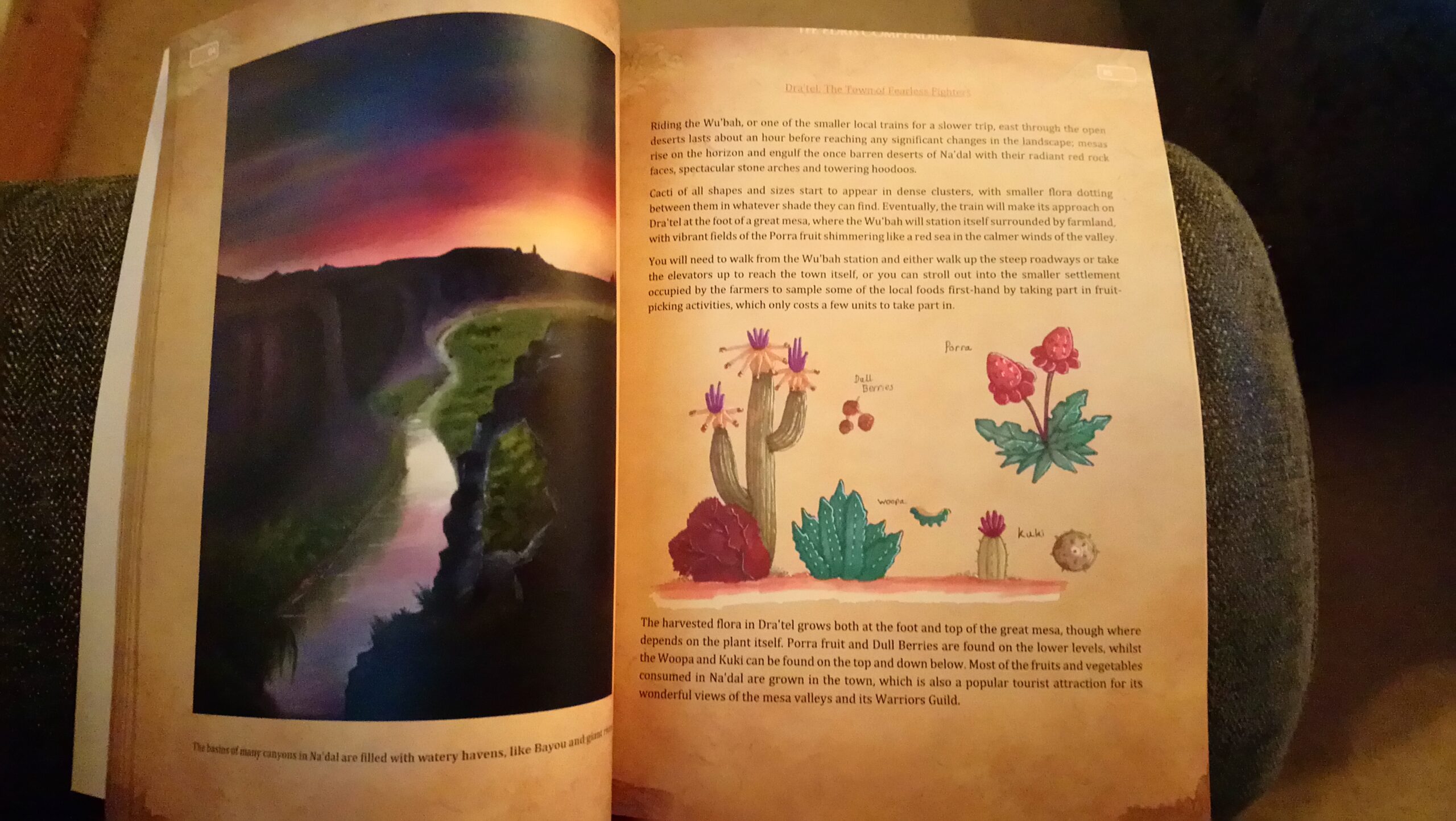 This months update is a little behind, but that’s because the Edris Compendium sample arrived! I had to do a lot of looking at the book sample along with some

This months update is a little behind, but that’s because the Edris Compendium sample arrived! I had to do a lot of looking at the book sample along with some quick edits, plus I’ve been unwell the past few days.

Anyway, let’s get into more detail about this particular project this month, shall we?

I created a quick video preview of the book sample, though must admit the lighting and camera angle is poor (I’m not a film-making person). Still, you get to see more on the books content/layout.

Well, okay, only 1 photograph. I am having difficulties with my phone sharing the pictures I have taken between it and my computer, so for now there is only one. Still, it gives you a rough idea of how the book print looks and the overall layout of images.

Considering the book is roughly 21x27cm the pictures for the plants and the animals (many which were drawn very small) have come out fantastic. The paintings I did for the landscapes also came out absolutely stunning; they’re vibrant and crystal clear, just like the prints.

You can still nab prints of various landscapes featured in this book at Redbubble.

How has this project developed?

The book has gone through a drastic change from my original concept. Previously, the book was going to be all white pages, much like the Beginners Guide to Jinimaru, but after playing around with colours for the background I decided to go for a coloured one! It’s worth mentioning that the E-book version does NOT have the stylised background, as it looked horrible on ink-based e-readers.

The backgrounds are made in a “journal” style, which also suits the theme of the book better too; this isn’t a clinical series of texts like the Beginners Guide was, but it’s not a story either. Think of it as something between the two.

Because of this change, I had to do various revisions of all the creature artwork I had done previously so they would look good on the new background. This took up quite some time, among other things I decided to upgrade, hence why I have taken longer to post an update this month.

The map also got an overhaul to better suit the books new interior design! Both the Coloured map and a “Parchment” edition have been made available for sale in the Redbubble store, and also have been updated in the book interior. At the back of the book, you can find a copy of the brand new full-coloured map, compared to the Parchment one which is only used for each regions identifier at the start of the chapters that needed them.

Now that the Compendium is fully written, edited and formatted, all I have left to do is fill in one or two empty pages (used to keep all chapter title pages and creature artwork on the left) with sketches.

I plan on popping in some architecture sketches here and there, but if I’m not happy with any of them then I’ll probably need to do some more paintings, which won’t dry as well now that it’s so cold. Still, these pages will be filled in before October 31st when the book officially launches.

The E-book version of the Compendium is available to pre-order now though! (UK, US, CA, JP, AU and lots more Amazon international stores.) The print edition will be available the same day, but Amazon doesn’t provide pre-order options for self-published printed books, sadly.

Due to its massive size and how long it has taken me to create, the book will be retailing at £24.99, though when I am able to attend conventions again this price will be much lower sold at the stall (as usual). However, I do not know when I will be able to this.

This book is the biggest chunk of my world-building project to-date, but it wasn’t my first, and I am sure it won’t be my last either.

Because of The Jinimaru Project’s sheer size, I made a “Handbook” edition of the Beginners Guide recently, which covers the 16 breeds and some very basic info on the Jinimaru; this handbook contains the first 2 chapters from the Beginners Guide, at a fraction of the price of the entire book, which can be a little daunting to newcomers of my world.

You can check out the preview above, or view the entire collection on the “Specimen G-13” page, found under “The Jinimaru Project” in the Major Projects category on the site navigation banner.

This month has been pure chaos; from making radical changed to the Compendium, to polishing its content, formatting it to meet vague specifications, and making an E-book-ready version. It’s all been worth it though! Flicking through this book as a physical print has been delightful, and those I have shown it to cannot believe I had written and drawn so much for a world I told them virtually nothing about.

I love how this book looks, and am excited to get working on the Cosplay Edition, which is smaller and has a more stylized “journal” cover, and I hope you enjoy the samples on offer and decide to go for a printed copy. (It really does look awesome!)

So until the next update, which will be just before the book launch, I will leave you with this: Specimen G-13 Part 2, The Black Knight, is half-written in first draft already, and it’s only been 3 months. More on that and other projects next month!