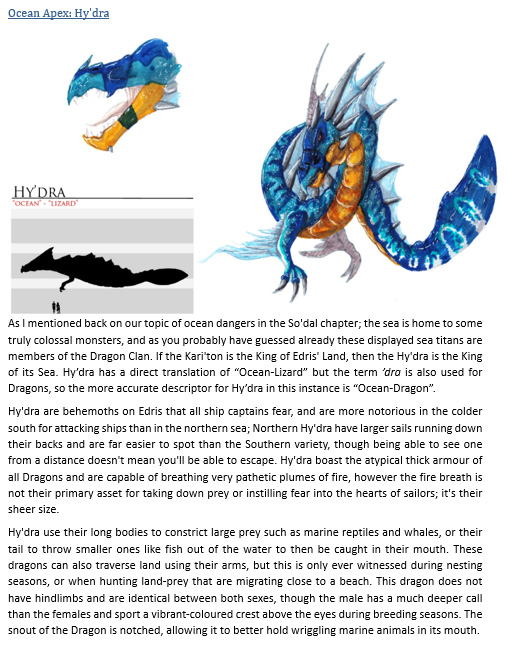 I have this month’s update ready! Or at least, as best I can do at this moment in time. My brain is a bit like mashed potato right now after

I have this month’s update ready! Or at least, as best I can do at this moment in time. My brain is a bit like mashed potato right now after spending the past few nights editing Specimen G-13 until I exhausted myself. Anyway; off we go!

I have a lot of really exciting news; the Jinimaru Project’s huge art book, the Edris Compendium, is now 100% written! It still needs editing work done, which means sample text may differ in the final book, but all that base writing is finally completed and I can now focus entirely on doing its missing artwork. I have a checklist of things to do and will be doing one image every single day for it, alongside any other work that needs doing elsewhere (like the editing and formatting). Hopefully everything is still on track for that end of year launch I had planned.

Specimen G-13 is now fully edited and I can now focus on getting the other two Folklore Tales edited alongside the Edris Compendium. Specimen G-13 just needs formatting a bit more but I am looking to get the book launched earlier than October, and plan on having it and the two short stories ready by July (just in time for my birthday!) I have a large queue of Folklore Tales I want to do, but until the Specimen G-13 series is finished I don’t think I’ll be writing any of them; there are two more books to do for the series, and they are a lot bigger than I first expected and take longer to polish up, so those short stories will have to wait until that behemoth of a series is finished.

I don’t want to dawdle on this, because quite frankly I have already explained what went wrong in a shorter post, and it’s embarrassing.

Everything is now up and running again, if not better than before, but I am still thinking on some new artwork to make just for the site that is unique to it, and I am also looking to either cut some pages or merge them together. Still, the whole site shouldn’t up and vanish again since I don’t need to migrate it right now.

Long-term followers of mine will know that I do all my work in a tight corner of a room, namely my bedroom, and that meant I rarely ever went outside to get fresh air or sunlight. Well now I decided to move my painting supplies outside and into our Summer House!

This makes painting so much more enjoyable and I am glad that I did it, however, this makes filming me doing paintings exceedingly difficult. We don’t have power down there or good WiFi, so for the time being all I can do in the little studio is take snapshots of my progress.

If you want to see “Work In progress” photographs you can become a Patron and unlock those pictures. All time-lapse videos will remain accessible to everyone on YouTube.

The final few samples for the prints have arrived; these are small Lustre ones of the fan-art I made. Because each painting was different in size, these two are both printed to match those different canvasses. I love how these prints came out but I don’t have any room for them, so I will be giving them away as prizes for a contest. I haven’t decided what it will be yet.

I also have managed to put one of my Edris maps into a frame! Granted it’s not the type of frame I would have liked to use, but it was all I could get a hold of in the current economic climate. I am looking for something a bit more traditional for the golden map version, though I may not decide to keep both of these for myself and give away one of the maps as a prize too.

Again most of this month has been dedicated to editing work, both on books and the website after I accidentally deleted it, and continued progress on the Edris Compendium. However, with Specimen G-13 part 1 now fully edited and the Edris Compendium “first draft” writing now complete, a huge weight has been lifted. I have been losing sleep these past few weeks, worrying about editing my work and struggling to find a new editor, and hopefully now that these two hurdles have been jumped I can now make a dash for the finish line and get them published.
I will make a brand new post the minute Specimen G-13 goes live! So next month’s update may come sooner than expected, and will likely be shorter as a result. Who knows! We’ll see if I can format things faster than I can edit them!