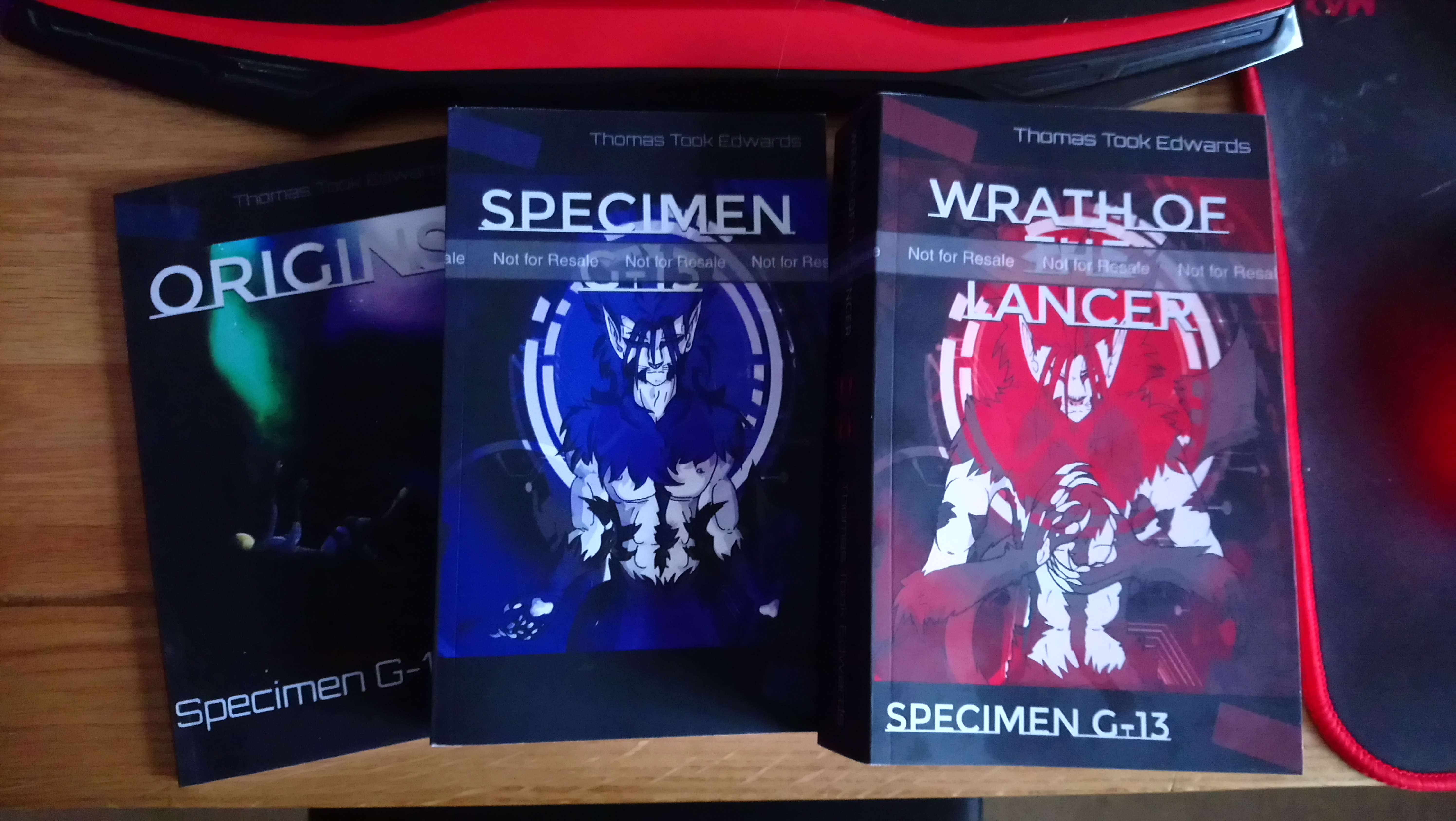 Well, it’s the first update of the new year! I have a bunch of things to get through, so sit tight and expect a few pics and confusing waffle associated

Well, it’s the first update of the new year! I have a bunch of things to get through, so sit tight and expect a few pics and confusing waffle associated with being self-published!

It has taken me a few months of designing, and waiting, to finally be able to share on the site that the Specimen G-13 trilogy, and Edris Compendium, will soon be available in hardback through Barnes & Noble!
The books samples will come steadily as I edge closer to finishing their final edited stages, so they will not all be viewable at once; the example picture above is just a digital mock-up I did to give you a rough idea of how the hardback covers will look.

I chose to merge “Origins” with Specimen G-13 part 1 because it was too short a story to warrant a solo hardback edition, so you aren’t just getting Part 1 in “Specimen G-13”; you’re getting the prequel too!
I expect to have “Specimen G-13 & origins” up for sale before the Edris Compendium, just because I may need to do a lot more adjustment to the interior print files for that project.

Will I provide hardbacks for other projects? Not likely; RAWR! It’s Donisaur! and the small Jinimaru stories aren’t big enough to make the higher price-tag justifiable. As for Thulian Blue, I can’t say right now. Subject 218 novels are also better looking as paperbacks, so they won’t get any either.
Speaking of which…

The first book I ever published, Subject 218, has finally been remastered. I edited it on-and-off throughout the writing process for “Wrath of the Lancer”, and after a few years working on book covers and such now I felt it deserved a new look to it to match the refined work inside.

The book is printed using Amazon services, is smaller than before, has a matt cover, and in terms of quality, the paper and print is vastly superior to the likes of the old LuLu copy I have. It’s safe to say I am far happier with how this book has turned out now that I have edited it myself, but I still wish I could trust others to do the job instead, but after the last person I put faith in to edit my work lied about doing it, I doubt I will allow another to edit my work (or say they will) ever again.

You can grab Subject 218 in e-book format as well as print on the Amazon page. It is available in the other Amazon country stores too.

I received my proof copy of “Wrath of the Lancer” over a week ago, which contains my 2nd draft of the story, and have been re-reading it, scribbling down more notes for editing purposes, and have begun working on the 3rd (and hopefully final) draft.

Looking at the sheer size of this book has me daunted by how big the last instalment of the trilogy will be; part 1 is around 350 pages long, part 2 is 510, and if my trend of adding roughly 200 pages continues then part 3 could be nearly 700 pages long! Ouch!

That’s going to be a chunky book to hold and I mean, part 2 is a bit weighty already, but I really don’t want to split part 3 up if I can help it. I may have to do some intense scene cutting and limit the books page-count to 600 max.

I’m still getting use to formatting my books with smaller fonts, but I don’t want to make the writing so small that it becomes unreadable for people with reading difficulties when it comes to text size. I feel that font size 12, which G-13 is written in, is the best size. It’s small enough to have plenty of text on the page, whilst also not being too small that you need a magnifying glass, because let’s be honest here; a lot of books are printed in terribly small fonts.

It took me 5 years to write and edit Specimen G-13 part 1 and its prequel, but partly due to quarantine (the other being my love for this part of the tale) I was able to crunch through writing Wrath of the Lancer in less than a year, and editing it has so far been a lot easier and pleasant now that I have the experience of editing Subject 218 and the last 2 parts in the Specimen G-13 series. It looks set to launch as-planned by June 20th this year.

As for the work in progress title “Heart of the Feles”; the synopsis and story notes are finished, and once Wrath of the Lancer is fully edited I will begin working on that book next. Whether or not it will launch June 20th next year, I cannot say right now, as I am also starting another project I’ve left on the shelf for many years.

Aside from the above sketch, and a handful of recolours, there hasn’t been much I’ve shared on the development of this book project.

Thulian Blue has been scrapped and remoulded so many times now that it barely resembles the original concept I had for it. It’s probably been the most heavily edited story I’ve worked on, and that’s before I’ve even written the first draft.

I have decided to begin writing the first draft now, as Subject 218’s Remaster was finished sooner than anticipated. Thulian Blue, however, has no determined date for when it will be launched, as this will be my first (and possibly only) book I am looking to get published by someone else. Why? Because it’s not as niche as the other projects I’ve worked on, and is more likely to get picked up by someone.

More details and artwork will slowly be shared over this year as the project finally gets some attention from me, however it isn’t the only thing getting artwork done for it.

You can find more character artwork in “The Jinimaru Project – Character Bios” tab of the website. Right now there are only six, but more will come over the course of the year.
Why is it taking so long? Unfortunately, I have carpal tunnel syndrome, which impacts the wrists functionality, and also symptoms of early-onset arthritis in my joints, including my hands. I can no longer do artwork for the extended periods I use to without discomfort or pain, and until I receive treatment all artwork is going to be slower for the foreseeable future. To say I am devastated would be an understatement.

I hope to still paint and draw where I can, but until my condition improves I won’t be able to do my “Sunday Morning Paintings” or the “Dinovember” marathon I barely managed to do last November again. It’s hard enough having to write, cook, clean, and even walk down the stairs with how bad my joints have become. I kindly ask for your patience if you are waiting on a higher stream of artwork submissions.

First and foremost, I wish to thank everyone who gave me feedback and support for the development of Wrath of the Lancer; the title it now has is far superior to the draft name it once had, and the covers for the hardback editions look highly promising. I cannot wait to see how they turn out in person.

Second, providing my condition doesn’t worsen, I hope to use this years Dinovember to get at least one more “RAWR! It’s Donisaur!” printed. I have no plans to write any Jinimaru Folklore stories this year, but do hope to edit the “N’iota the creature of ambition” one for WattPad sometime this year too. It is, however, missing a refined cover and that too relies on my joints not getting any worse.

This will do for this months update; I’ll see you again in the next one, hopefully with a printed sample of two for the hardbacks!