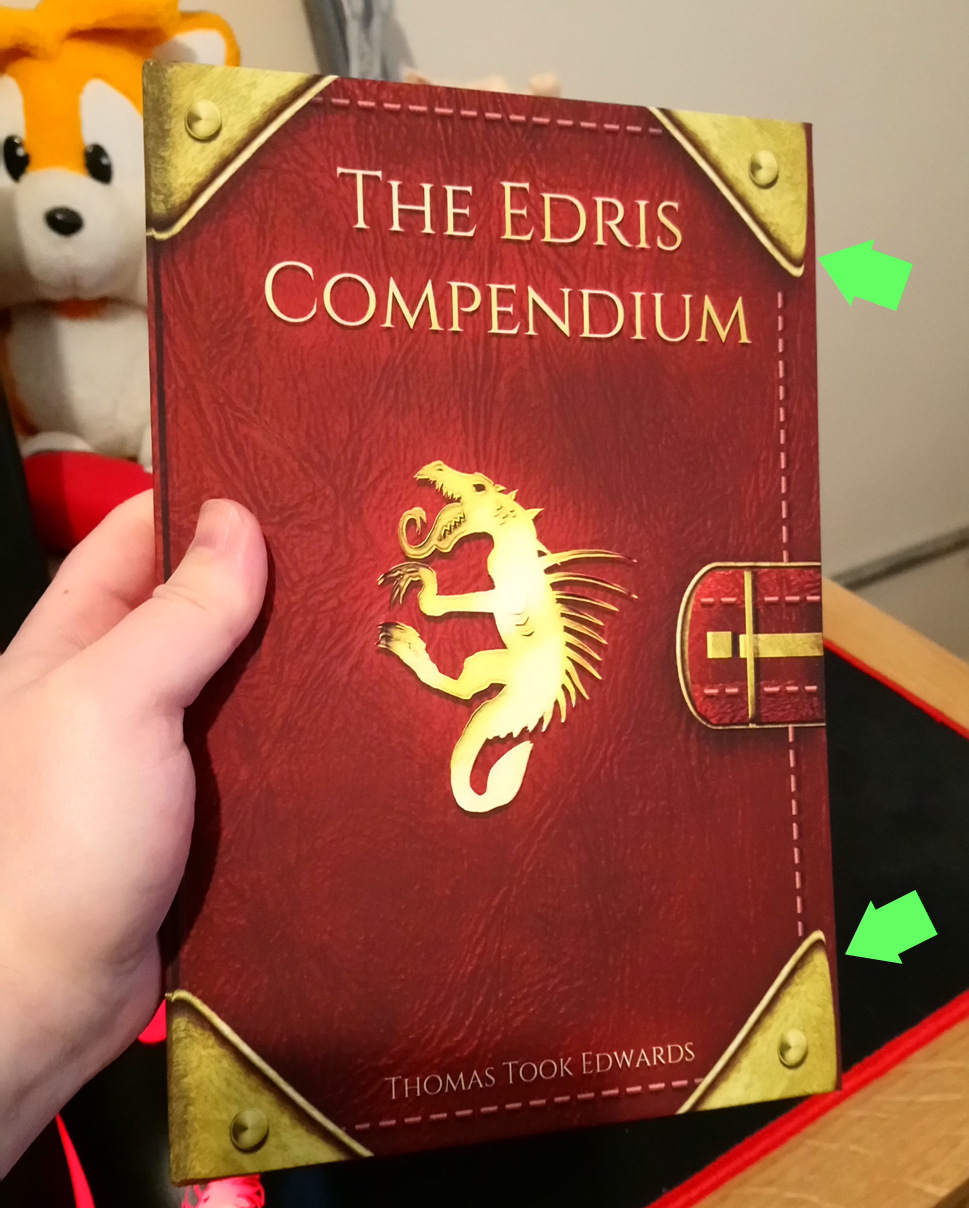 Happy Holidays! This year has been something, hasn’t it? I could round up everything I’ve done this year in the last update for 2020, but new things have been worked

Happy Holidays! This year has been something, hasn’t it? I could round up everything I’ve done this year in the last update for 2020, but new things have been worked on and I don’t want a long string of highlights from the whole year to drown them out…

The work for the Edris Compendium’s smaller-sized and more lore-friendly cover has been my secondary focus for the month of December. This edition is exclusively hardback only, though all being well it should come as both a standard hardback with or without a dust-jacket.
Its interior has been reformatted for the smaller size and includes some paintings and artwork that isn’t in the larger version of the book.

This edition of the book is meant to represent how the actual book appears in the Specimen G-13 series, and would be more suitable for using in cosplay if desired, hence the title “Cosplay Edition”.

Right now I have no dedicated printer for hardback books; Barnes & Noble are my primary choice but aren’t open to non-US citizens for printing and distribution services right now. I chose to order a sample from LuLu as a back-up option, but have been disappointed tremendously once again by the service, and I continue to no longer endorse them. You can see the images below of the sample I received.

I have already rambled about LuLu’s inaccurate “digital proofing” system before, both on my website and social media, so I’ll save you the headache of me repeating myself. Just know that the areas addressed by the green arrows on the above pictures highlight areas that were shown to be outside the margin area, in the zone they should have been either cut or folded out of sight, by LuLu’s digital proof.

Until Barnes & Noble verify my vendor account, allowing me to distribute my work through them, the Cosplay Edition of the Edris Compendium will not be going on sale; LuLu’s services have been inconsistent, and I refuse to use them knowing they deliver shoddy work like this, and knowing that their proofing system is broken, no less!

So, for now at least, there is no known date I can give for when this version of the book will be made publicly available. You can still grab the original editions of the Edris Compendium on Amazon, though.

Following along the Jinimaru Project with Specimen G-13; this month it has been my primary project, and after writing 3 chapters this month alone, and only 4 more to go, I am well on my way to hitting that June 20th launch as originally planned.

With the first draft nearing completion, it came time to revaluate the subtitle of the book. “The Black Knight” was a working title, just like “Heart of the Feles” is, and almost every other book I have written doesn’t have the same name it started with. I felt that this particular entry in the series was rather focused on the main characters trying to stop an assassin, known as a “Kon’ton” in the Jinimaru tongue. This assassin, however, is also part of a Royal Army and has the honorary title of “Lancer”, or “Black Knight” to outsiders.

The subtitles I came up with were “The Shadow Hunter”, the English translation of “Kon’ton”, and “Wrath of the Lancer”. I put out a poll but got no response, and had to consult with people via other means to pick one. After much thought, I went with Wrath of the Lancer and quickly began crafting the cover designs for the hardback editions of Specimen G-13.

I also decided to make hardbacks for G-13, which have been designed to match the Edris Compendium. The covers shown on the “Specimen G-13” page are the Amazon paperback and e-book covers.

The final hardback book, currently dubbed “Heart of the Feles”, will have a green leather and copper metal colour scheme, though I have yet to design the symbol for the centre of the cover.

Specimen G-13 uses the DNA artwork, which is also found on the spines of each book. Wrath of the Lancer has a Fo’fei Dragon skull for its artwork. Presently, Heart of the Feles will likely have either a feline paw/handprint or something connected to trees. Origins, the prequel, will also have a hardback edition but I have not thought of any designs or colours for it.

The LGBT+ Dinosaur designs have been on sale through Redbubble since the end of November, but now most of them can be bought on T-shirts through Amazon as well!
They feel and look just as good as the Redbubble shirts, but are much cheaper (£13.49) and arrived in less than a week. They also come with free delivery if you buy £20 worth of stuff on their site, which is a big step-up from Redbubbles sometimes outlandish shipping fees (can exceed £10 delivery).

Whilst the shirts won’t arrive before christmas, they’ll still make nice gifts for next years festivities and events. Maybe someone you know who goes to a Pride event might like one!

You can see the available designs by clicking HERE. Please note that only the LGBT-Rex design is available in the USA at this time.

I only ordered myself the Transgender top because that’s all I could afford before the holidays, but I will be grabbing the LGBT-Rex next year, so expect a photo of that in next months update!

The work I have done this year has been primarily “Jinimaru Project” related, with the Edris Compendium taking up a MASSIVE chunk of my working time. Next year I want to tackle a project I haven’t touched since summer 2019: the Subject 218 Re-edit.

Next year I don’t plan on crunching out the final entry to Specimen G-13 like I have done with Wrath of the Lancer, but I still hope to have it on sale by the end of 2022.
Once the first draft for Wrath of the Lancer is finished, I’ll put it to one side for a month and look at it again with fresh eyes before the editing process begins. During this month away from the project, I’m going to get working on the Subject 218 Re-edit and hopefully have that up and available through Amazon by the end of next year.
Sadly the second volume of Subject 218, Code-name: Bloodhound, will not be getting a re-edit or be made public again. Why? Because he ending for the first book is better left ambiguous. I have so many endings for that series alone that I want to write them all and leave it to you folks, the readers, to decide which ending is your true one; all 4 of them are still what you’d call “canon”, I’m just not outing which one I like the most. There is a 5th ending but I wouldn’t be able to write anything about it because of reasons that are filled with spoilers.
Here’s a really rough idea of future project work over the next few years.

Projects such as “RAWR! It’s Donisaur!” and the Jinimaru Folklore short-stories will be made whenever I have a period of time I feel like working on them, as both projects are potentially endless.
The forecast for projects is subject to change based on my own health and wellbeing, as well as sudden changes in personal circumstances.

Besides a HUGE thank-you to everyone who has supported me and my crazy work this year, all I have left to say is have a happy and safe holiday, new year, and keep wearing your mask and washing your hands! We lived through 2020, now lets show 2021 what we’re made of!